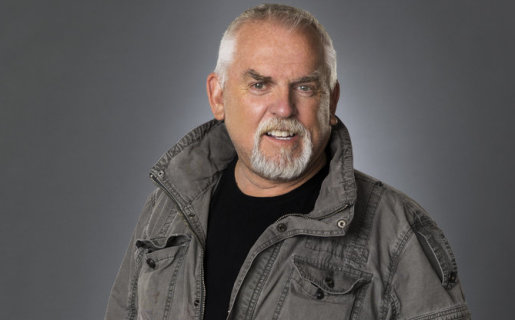 John Ratzenberger may not be a name you recognise, but you’ll definitely know the face. For many years, (1982 to 1995 in fact!), John played Cliff Clavin, the know-it-all mailman in the brilliant TV sit-com Cheers; but more recently perhaps it’s not his face that you’ll recognise … but his voice.

Ever since Pixar had it’s first major success with the ground-breaking TOY STORY, John Ratzenberger has been their lucky charm – a term coined for John by the head of Pixar, John Lassiter. He voiced a character in that film, it was a huge success and so they made sure he voiced a character in every Pixar film since then.

Given that we’re now knee-deep in the summer holidays and, knowing the British summer weather, there will be some rainy days ahead of us and so, for this #FilmJourney, we’re going to concentrate today on highlights from John Ratzenberger’s Pixar portion of his career.

With that in mind, the first film we’ll be focussin on is INSIDE OUT which is in UK cinemas from today. This is the latest family animated feature film from those wizards at Disney Pixar. The synopsis sounds, perhaps, more like a young adult drama than a family film: After young Riley is uprooted from her Midwest life and moved to San Francisco, her emotions – Joy, Fear, Anger, Disgust and Sadness – conflict on how best to navigate a new city, house, and school.

But Pixar have this knack of adopting a conceit that appeals to both children and adults and then presenting a world around it that is both age appropriate and thoroughly enjoyable to watch.

Now, whilst #JohnRatzenberger doesn’t feature in the film that much, I still wanted to talk about it today. As I mentioned he is Pixar’s lucky charm and his short stint here is similar in length to other Pixar films he’s done; but this film is likely to be huge.

Children are already loving the advanced screenings they’ve seen, parents too are commenting on not only how enjoyable it is, but also how the level of pathos is set just right to twinge their nostalgia buttons. Also – and how many family animated films can boast this – various scientists and medical professionals are praising the film for it’s depiction of what goes on inside our heads. The visual storytelling on display here is – as is so often the case with Pixar – exceptional.

What’s next on this journey? Well, film number 2 is a bit of a change from the intricacies of the human brain.

Our second film is TOY STORY from 1995. TOY STORY 2 might have the biggest fan base, and TOY STORY 3 got the best critical appreciation, but TOY STORY, the first full-length film from Pixar had the biggest impact. You also have to remember that this was the very first animated full length feature film, where the animation was completely handled by computers.

John plays Hamm – a toy piggy bank who, much like Cliff from CHEERS, has an annoyingly endearing know-it-all quality to him. Hamm is part of the posse of toys that come to life when their owner, Andy, has left the room. The premise is lovely because who hasn’t wondered what their toys do when you’re not around to play with them.

Hamm is, by far and away, one of the best secondary characters in the TOY STORY films and has some of the best gags as well; which really play to the strength of John’s voice acting in comedy.

The final film today is MONSTERS, INC. from 2001. It’s a beautiful, poignant and simple story … all about how the monsters you thought were under your bed when you were younger … where actually real monsters under your bed when you were younger! Initially the monsters, who creep into children’s bedrooms form the own world via the closet door, are trying to scare children as they find that a child’s scream provides a sort of electricity for their town. By the end of the film, however, they realise that a child’s laughter is far more powerful. Too saccharine a message? We don’t think so; and neither do a raft of other parents who, like us, hold this up as possibly one of Pixar’s finest films.

John Ratzenberger plays the loveable Abominable Snowman – who, after being banished to the frozen wastelands of the human Antarctic for leaving a child’s closet door open, has gone a little stir-crazy after being left on his own for so many years.

The Abominable snowman comes in to the film at just the right point. The two lead characters Mike and Sully – played by Billy Crystal and John Goodman respectively – are at their lowest point. They have gone from hero’s to zero for – as we the audience know – doing the right thing. They have been banished to the Antarctic and are quarrelling; looking very much like they may even break their life-long friendship.

In a movie aimed at the younger side of “family”, the inclusion of the humorous Snowman at this stage, helps lighten the quarrelling; softening the tension and adding some much needed comedy moments. It’s a genius touch – add too much in and you miss the tension completely, don’t add enough and it’s a ‘saggy’ part of the story where kids could get bored.

It’s a testament to John’s skill as a voice actor that he doesn’t go overboard with this character. Couple all his voice work with little recognised performances in the likes of GHANDI and STAR WARS EPISODE V: THE EMPIRE STRIKES BACK and you’ve got a varied career, from a fine actor.