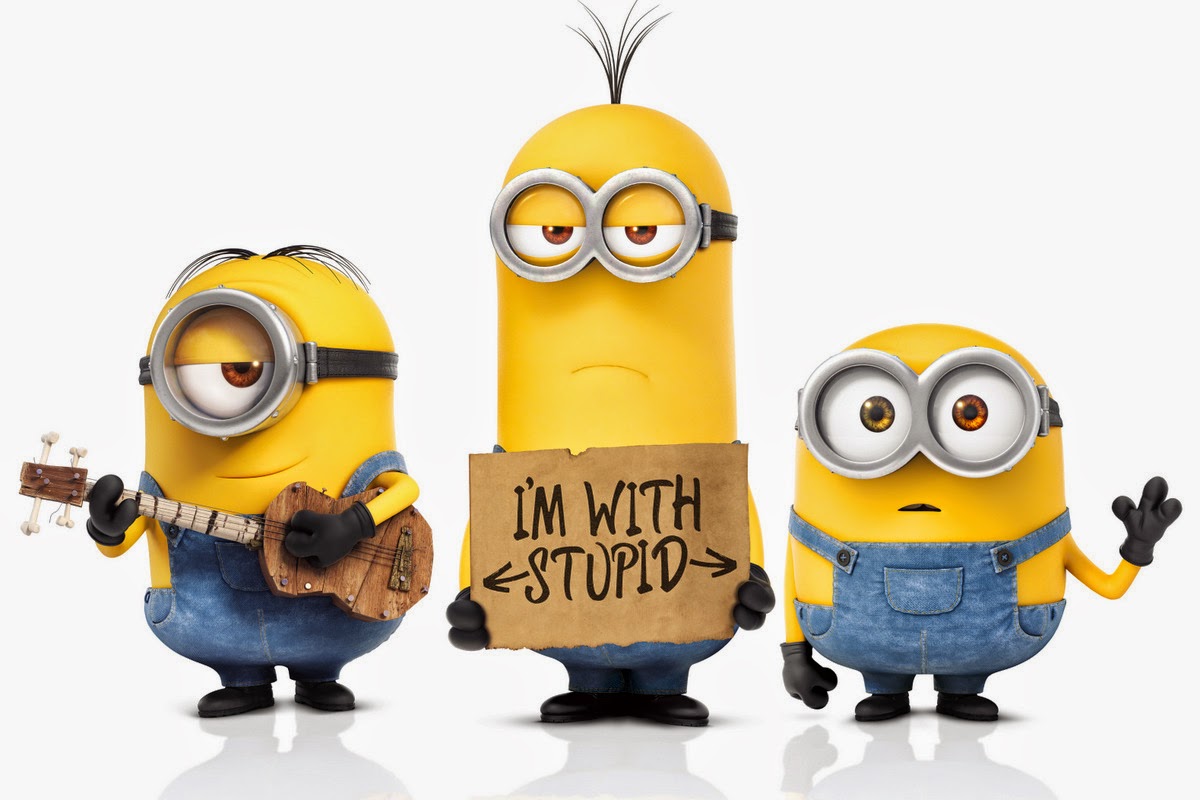 For those ‘not-in-the-know’, Minions, (capital ‘M’), are the small, yellow critters you will, no doubt, have seen everywhere from TV ads, to the side of buses. The Minions are … well, minions; beta personality creatures who live purely to serve a dastardly evil overlord.

They have gloriously unsuitable names like ‘Kevin’ , ‘Dave’ and, my personal favourite, ‘Stewart The Minion’. Their love of bananas is second-to-none and although you can’t understand exactly what they’re saying because of their gibberish language, somehow you always get the gist of it.

They have their own, big-screen outing coming out in cinemas this week, but before we talk about that, let’s find out more about how we, the cinema-going audience, first got to meet them. Which leads us nicely onto…

FILM 1: DESPICABLE ME (2010)
The minions first appeared on-screen, stealing both the show and our hearts, in 2010s DESPICABLE ME. About a third of the way into the film, there is a great scene where their evil boss Gru, (more of him later), summons all the minions for a briefing – it’s the first time we see not only just how many minions exist, (there are a lot of them!), but also how big the villains secret underground layer is.

If you’ve ever seen, or heard, a clip of these little fellas, then you may have noticed that they don’t *really* talk. Their gibberish is punctuated with the odd English word thrown in every now and again; often for comic effect, like this nugget:

Silas: “I am the head of the Anti-Villain League – my name is Silas Ramsbottom”
Minions: (giggles) “Bottom!” (fits of laughter)

For this, the first film in the series, the Minions really were there just for light comic relief … and it worked. They were the break-out success, despite the rest of the cast including the likes of Steve Carrell, (the US version of THE OFFICE and ANCHORMAN), who voiced the evil master Gru.

Gru is the perfect anti-hero for a family film – he is evil enough to come up with plans to steal the moon … but then puts it back and will enjoy popping a child’s balloon for fun; but when three orphaned girls come into his care, his tender side shows and he works with the girls and his minions to stop the new up-coming big bad guy Vector, voiced by Jason Segal, (HOW I MET YOUR MOTHER, FORGETTING SARAH MARSHALL). At its heart, it’s a genuinely lovely film with some very funny moments.

FILM 2: DESPICABLE ME 2 (2013)
As good as the cast and story where in the first film, DESPICABLE ME 2 brought the Minions front and centre in terms of story-telling. El Macho – the new big bad guy in this film is stealing Gru’s Minions and turning them into nasty, angry, purple version of themselves in a bid for – yes you’ve guessed it – world domination.

One of the most successful things about this film is actually something you would probably never notice. El Macho was originally meant to be voiced by none other than Al Pacino, (mentioned in #FilmJourneys 16 ‘Musical Biopics here). He had been in the studio and recorded all his lines. It was only very shortly before release that he left the project for ‘creative reasons’ and so his entire voice had to be re-dubbed. Now, this might sound like an easy task – after all it’s just animation. However, the animators usually record the voice actor in the studio as they are saying their lines and then use that footage to guide them with facial gestures and movements so that voice and animation match as best they can. The new voice of El Macho, Benjamin Bratt, (LAW & ORDER, MISS CONGENIALITY), had to work the other way round – he had to watch already finalised animation and match his voice to the that – a much more difficult task … and he only had a very short space of time to do this in. He did such a good job, no-one would notice.

Also joining the Minions in this outing where Gru and the girls form the first film, but also a new love-interest for Gru in the form of Agent Wilde – from the Anti-Villain League; whom he helps to thwart El Macho – however, once again it’s the Minions that provide more than just the laughs as they end up saving the day.

The popular tune “Happy” is considered to be the anthem of the Despicable Me films. It was written and sung by Pharell Williams who everyone thinks of as a pop artist / singer; however he actually also composed the entire score for the first film.

So, why have we been on a #FilmJourney just about Minions? Well that’s because of:

FILM 3: MINIONS (2015)
This is the film that my six year old daughter and MILLIONS of other children have been waiting for for three years. The Minion movie – or MINIONS for short – is out in UK cinemas from today and it’s an origin story.

The film initially follows the minions in their struggle to find the perfect bad guy to work for over a few decades. Unfortunately they’re exceptionally unlucky in evil, mastermind love – often being heavily complicit in their masters’ downfall.

There are 899 minions in the film, (I counted them … it took ages!) and they are all voiced by the same guy – Pierre Coffin, (who is also one of the directors of the film). The first few decades of the adventure feature all of them, but we soon settle down to just three intrepid explorers: Stuart, Kevin and Bob; as they set-out to discover a new master.

Finally, after much searching and many escapades, (including a particularly funny scene with a fire hydrant!), they find the deliciously evil Scarlet Witch, (voiced by Sandra Bullock – SPEED, GRAVITY). Scarlet Witch doesn’t quite turn out exactly as the Minions planned however.

There are plot moments and giggles aplenty throughout the film and I won’t spoil some of the more outrageous set-pieces; but suffice to say that your favourite bad guy, (aka Gru), makes an appearance and I think you can probably work out where he crops up in the proceedings.