Tom Hardy is a British actor with a long and varied career; working with the likes of Christopher Nolan, Gary Oldman, George Miller and Benedict Cumberbatch. He’s currently starring in the UK’s number 1 movie … twice!

On general release in UK cinemas at the time of writing, is LEGEND (2015). The British noir crime thriller tells the story of the identical twin gangsters Reggie and Ronnie Kray, two of the most notorious criminals in British history, and their organised crime empire in the East End of London during the 1960s … and it’s Tom Hardy who plays both of the Krays. The film itself is a little unbalanced, at times a beautiful calling card to the 60s East End of London, at other times a clichéd TV movie with clunky dialogue, but the saving grace of the film – which is probably a bit of a harsh phrase as the film is actually very watchable – is Tom Hardy as the brothers Kray.

There is a scene in the movie where both Reggie and Ron are introduced to, and decide to deal with, the American Mafia. Actor Chaz Palminteri, who plays the Mafia connection, offers a toast to the deal and, after being initially reluctant to engage in conversation with Ronnie, suggests that next time Ronnie visits L.A, he will find him any type of girl he wants.

“I prefer boys”, replies Ronnie to a stunned silence in the room. At a time when homosexuality was illegal in the UK this is quite a declaration.

“You’ve got some balls to say that. Some real balls”, is the eventual response from Palminteri, raising a glass to his new business partners.

The film is a little unbalanced but when the film is good, it is great. The dialogue often gets going during conversations between the brothers; also between Reggie and one of the Krays’ Firm. When this happens, everything speeds up and the film whizzes along. 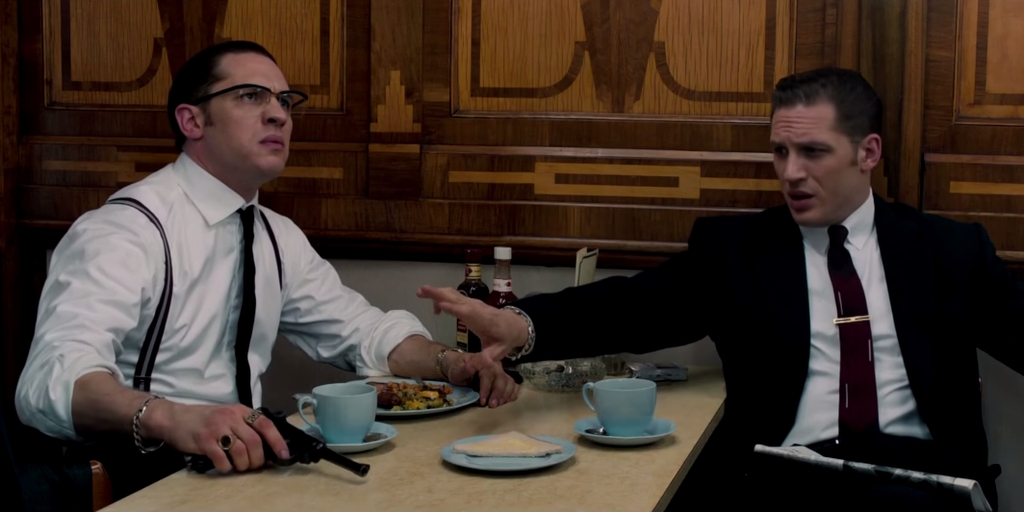 The brothers rule not only London, but also the screen in this movie based on the book The Profession of Violence, by John Pearson. This command of the screen is all down to #TomHardy. To command the audiences’ attention with one role is hard enough, but to do it with two roles? Well, it’s more than twice the work, it’s an epic acting feat; especially considering that Hardy doesn’t have any props nor much in the way of physical appearance to distinguish the identical twins. It’s a double-powerhouse performance and well worth a look.

Our second film in this #FilmJourneys for Tom Hardy is BRONSON (2008). A young man who was sentenced to seven years in prison for robbing a post office ends up spending three decades in solitary confinement. During this time, his own personality is supplanted by his alter-ego, Charles Bronson. And it’s a considerably bulked-up Tom Hardy who plays Bronson.

Bronson:
My name’s Charles Bronson.There was nothing wonky about my upbringing; like most kids I got into trouble.
I wasn’t bad. I wasn’t ‘bad’ bad. All my life I’ve wanted to be famous. This is the Post Office I did over.
This is what I got away with. This is what they gave me. [7 years imprisonment]. But I still had my principles..

Now at first glance this might sound like a very similar role (or set of duel roles) to the Kray twins from Legend. However, this is a slightly different kettle of criminals for two reasons: firstly playing the Kray twins is playing two distinct people – similar to each other in many respects but two separate humans. Playing Michael Peterson thinking he’s Charles Bronson… that’s a very different thing to do. 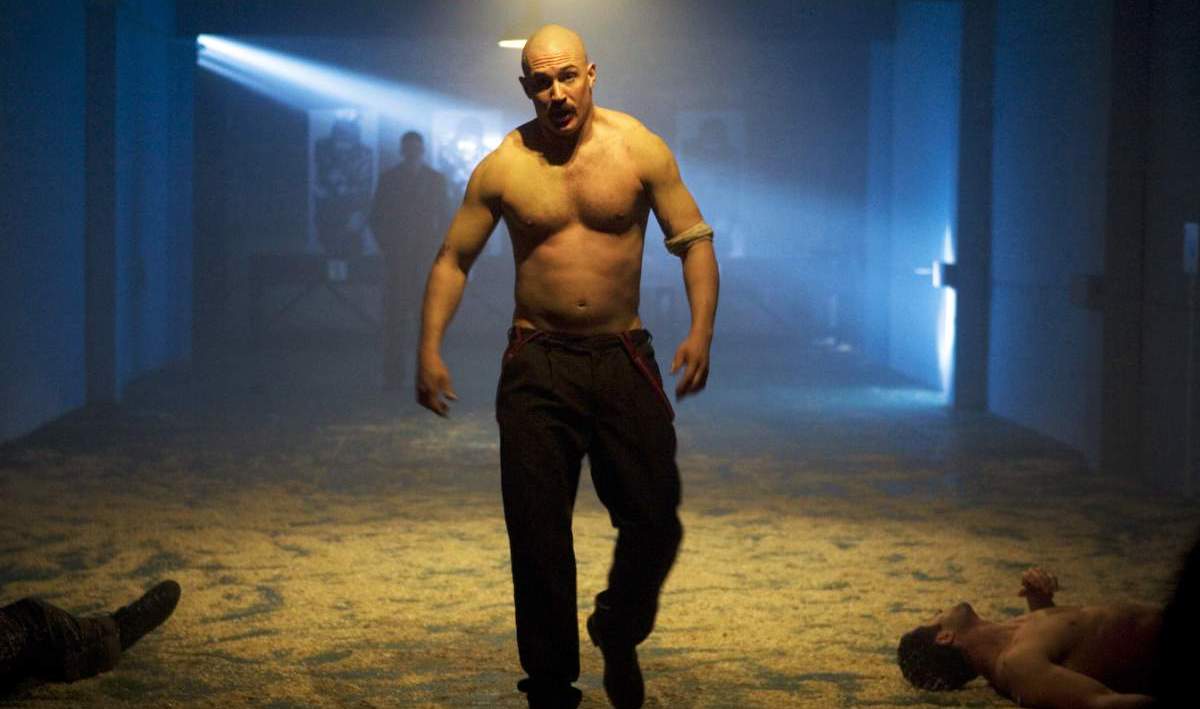 The film is a little avant-garde and certainly has its tongue firmly in its cheek throughout, but it took a lot of skill on Tom Hardy’s part to not go too far over the edge with Bronson. There’s a subtle difference between over-blowing the maniac side and ending up with a comic book villain like The Joker, but what was required here was the portrayal of a man utterly believing in himself as his alter-ego.

Our final film for this Tom Hardy Film Journey is MAD MAX: FURY ROAD (2015). This was one of the films that shocked everyone the most this year. The movie centres around a woman who rebels against a tyrannical ruler in post apocalyptic setting, in search for her homeland with the help of a group of female prisoners, a psychotic worshiper, and a drifter named Max who is played, in this iteration, by Tom Hardy.

Now Tom hardly speaks in the entire film and when he does it’s mostly an odd grumble or grunt, so bringing character to his version of Max has to come through a lot of body language. 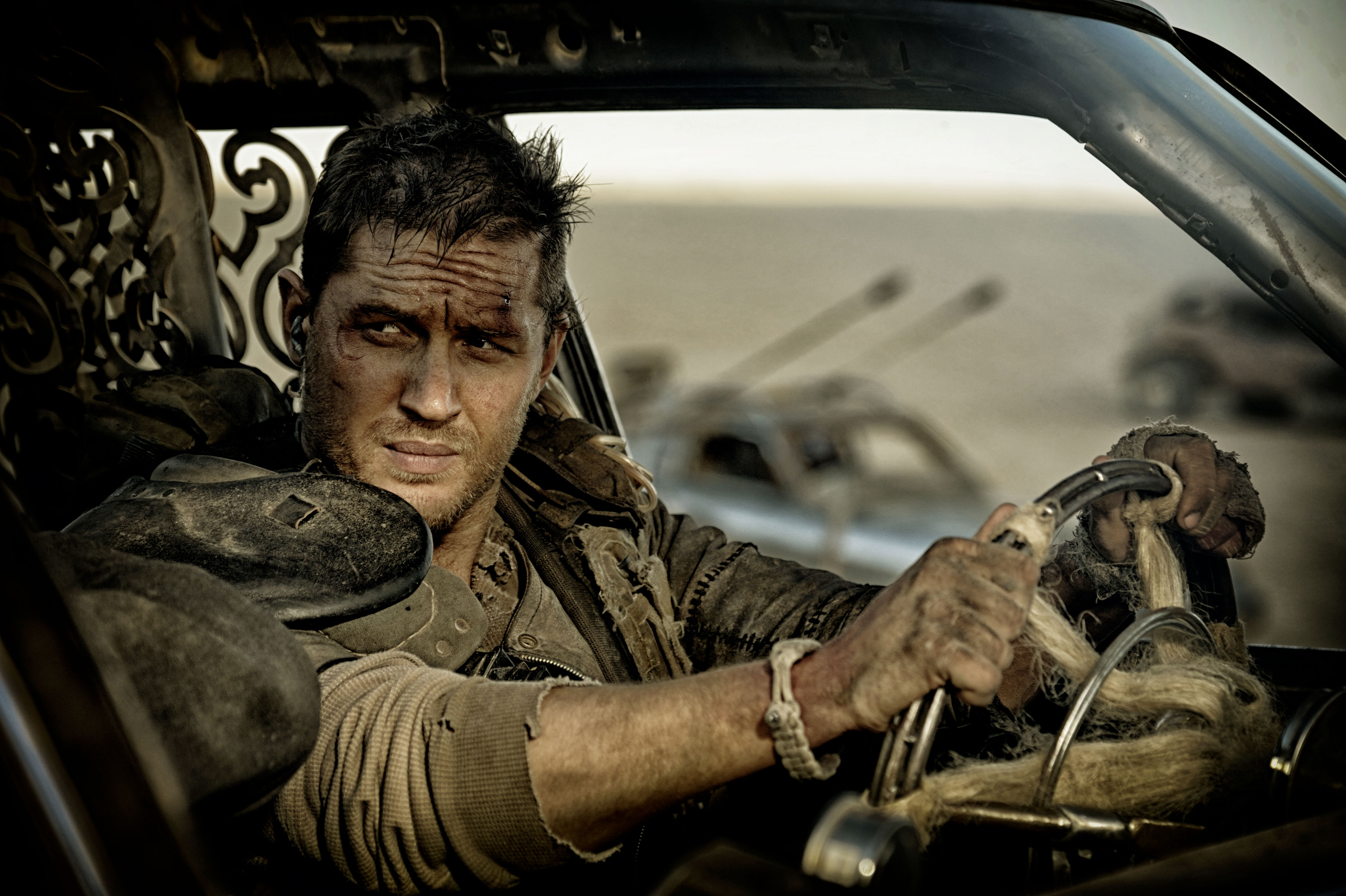 The film was a surprise to most because it not only embraces all aspects of what you would expect a Mad Max film to be – fast cars, action, explosions all in a post-apocalyptic setting – but it was also a Hollywood studio film that gave us a credible lead female action star in Charlize Theron. Tom’s Mad Max, which had previously been played by Mel Gibson, is certainly not surplus to the requirements of the story, far from it, but it’s Furiosa, played by Charlize, who is the star of the story. We covered the whole idea of this as a Hollywood film attempting to break the gender equality gap in action films it in much more detail in a separate ‘Film Journeys Talking Point’ video you can watch below, (or read here if you prefer):

Think about the daunting task Hardy had in this film; he is taking on, for all intents and purposes, the lead role of a massive Hollywood blockbuster, his first true lead role where his name will be carrying the picture. He’s following in the footsteps of Mel Gibson in a character loved by fans all over the globe. On top of all that, his version of the character is going to play second fiddle, to coin a phrase, to Furiosa – playing against fan expectation. That’s a tough gig and, like it said in the LEGEND scene described above, Tom Hardy has got some balls taking that on.