It’s time once again to go on a Film Journey, and this time we are focusing on a selection of career highlights for Maya Rudolph. Maya is an American actress, comedian and singer and has been seen in all sorts from Saturday Night Live to major movie releases, some of which we will cover in this journey…

The first selection today is, as always, a film you can see currently in UK cinemas and, as luck would have it, Maya has two films out in UK cinemas right now THE EMOJI MOVIE and THE NUTJOB 2.

Both are animated family movies where she provides the voice of Smiler (the villain of the piece in THE EMOJI MOVIE), and the voice of Precious, (the adventurous female lead of THE NUT JOB 2).

The film itself has been getting a heavy critical mauling, but, having seen it with an audience of the intended age group, we can say that they enjoyed it, there were one or two neat ideas in there but the stand-out performance was Maya as Smiler. So, if you’re a fan of Rudolph and have children that enjoy the cuteness of emojis, then this could be for you … otherwise, we’d suggest The Nut Job 2.

The offline longline blurb for the films reads…

“Competition between the maid of honour and a bridesmaid, over who is the bride’s best friend, threatens to upend the life of an out-of-work pastry chef.”

…and that really doesn’t sell the film.

There is a terrific cast in action here, including Kristen Wiig, Rebel Wilson and Melissa McCarthy. But, once again, it’s Maya’s performance as Lillian, the bride to be, that, for me, really helps bring the strands together.

Here is an interview with Rudolph where she describes her character and the awkward position she is put in when her two best friends don’t quite get along.

It’s great fun to watch these relationships develop and the laughs are pretty consistent throughout. It’s certainly one to watch if you want to catch up on Rudolph’s catalogue of convincing characters. 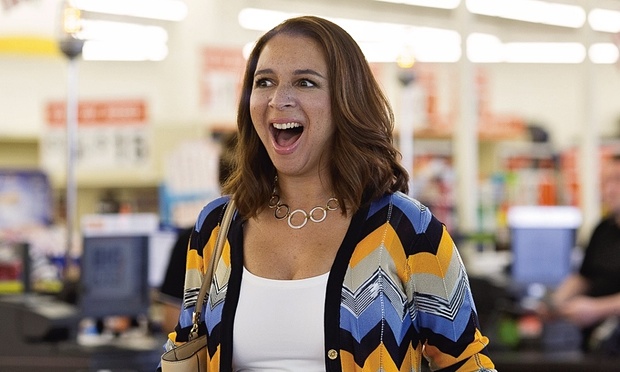 Our final film today in our Film Journey through some career highlights of the American actress Maya Rudolph is SISTERS from 2015. This comedy stars Amy Poehler and Tina Fey as two adult sisters who decide to throw one last house party before their retired parents sell the family home.

Maya plays Brinda, their adversary since school, who throughout the movie is determined to get in on the act or, if that isn’t possible, shut the party down.

Once again Maya mixes broad comedy with a really believable performance. So much so, that by the time you get to the reveal of why Brinda acts as she does, it’s both funny and heartwarming.

So there you have it, Maya Rudolph in two family movies out in cinemas right now, one film for teens and up (BRIDESMAIDS), and one that’s definitely for the adults only, (SISTERS). A selection as diverse and well worth a watch as her career to date.

– Many, many performances on Saturday Night Live