He said he’d be back … and he wasn’t wrong. TERMINATOR GENISYS is now on general release in UK cinemas featuring Emilia Clarke, (GAME OF THRONES), Jai Courtney, (A GOOD DAY TO DIE HARD), Jason Clarke, (DAWN OF THE PLANET OF THE APES) and, of course, Arnie.

He was please to be playing the Terminator for the fifth time on the big screen, as he has described in numerous interviews to promote the film. Just good PR? Well he is an old-hand at the game by now, but there does seem to be a genuine love for what is, arguably, his most known and, perhaps, best-loved character. 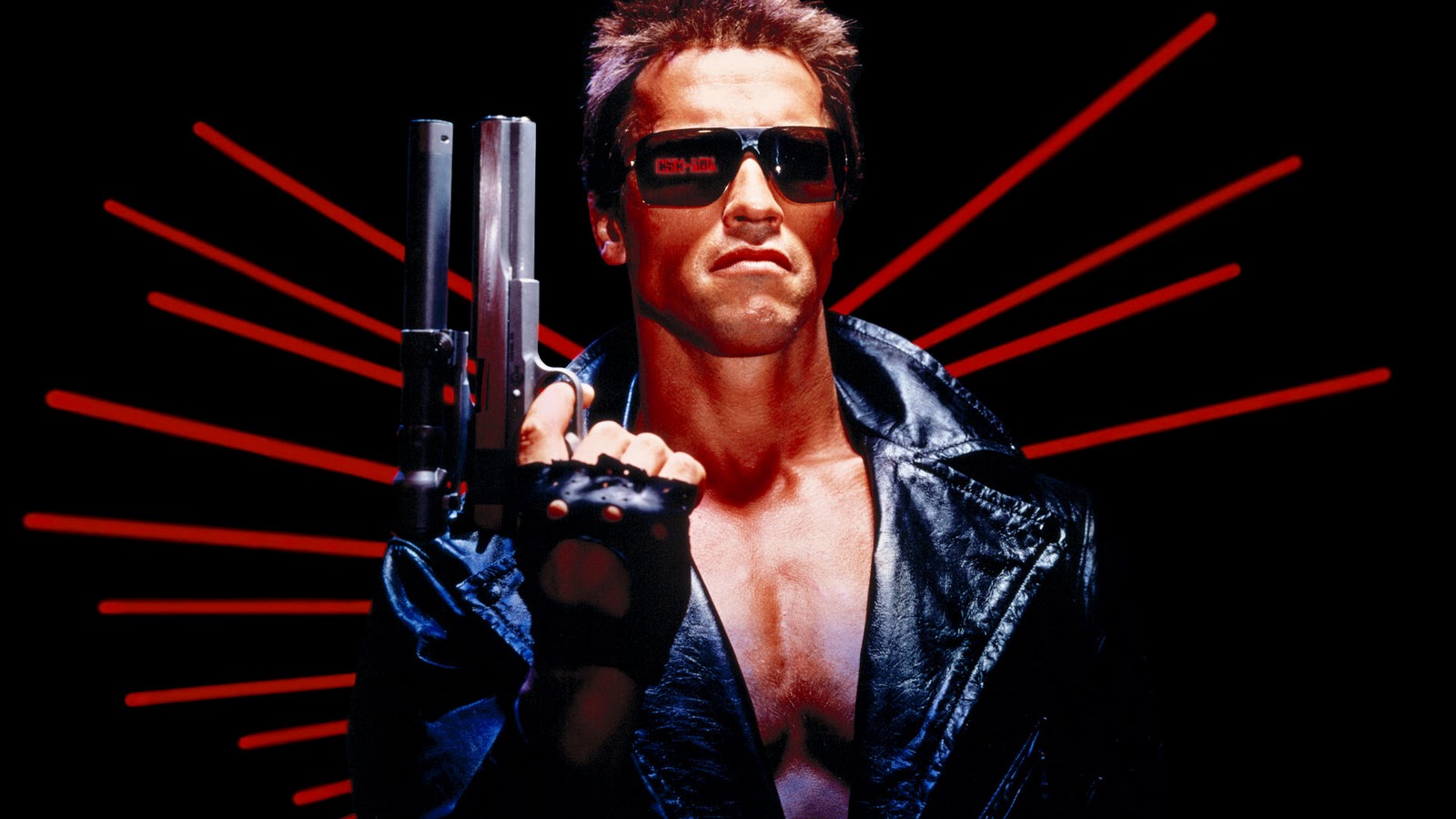 To explain the story fully would take a surprisingly long time. The screenwriters have done, on the face of it, a great job at ensuring all the regular elements of the franchise are present: time-travel, the protective, strong mother Sarah Connor and the leader of the humans that have survived almost near extinction at the hand of self-aware machines, John Connor. However they have also twisted thing on their heads – setting parts of this story, during the timeline of events from the very first film, thus altering the timeline we thought we all knew. On top of that they’ve also played with expectations of the well-known characters – making some good characters bad, and vice-versa. In short – there is a very brief scene between J.K. Simmons, (WHIPLASH), and Emilia Clarke that sums up the plot nicely….

JK.: “I wanna help you, I do … I think! But there’s all this confusing stuff going on and it’s a little complicated…”
EMILIA: “Where need to save the world”
JK.: (after a beat): “I can work with that!”

The great draw for audiences in this franchise has always been the thrill of seeing Arnold Schwarzenegger in his most iconic role. It almost seems like a role he was born to play – an emotionless, hugely powerful, killing machine – a robot hell bent on achieving his objectives. In this film he plays more than one version of himself, (when you’re a robot you can do that sort of thing).

It’s great to see Arnie back as the Terminator, especially in a story that plays with the fans expectations and, after the very bleak fourth film – I’m glad that TERMINATOR GENISYS adds a touch of humor to the proceedings.

Now, for the second choice of film, I could have gone for any number of ‘classic’ Arnold Schwarzenegger films from the 80s and early 90s. They are all good fun, nothing to be taken too seriously, and, to a certain extent, he often plays a very similar character in many of them. A critique often leveled at him is that he can’t act; or that his acting is ‘wooden’. My reason for including this film, is to help go some way to debunking that critique. In this film you see Arnie like you’ve never seen him before. 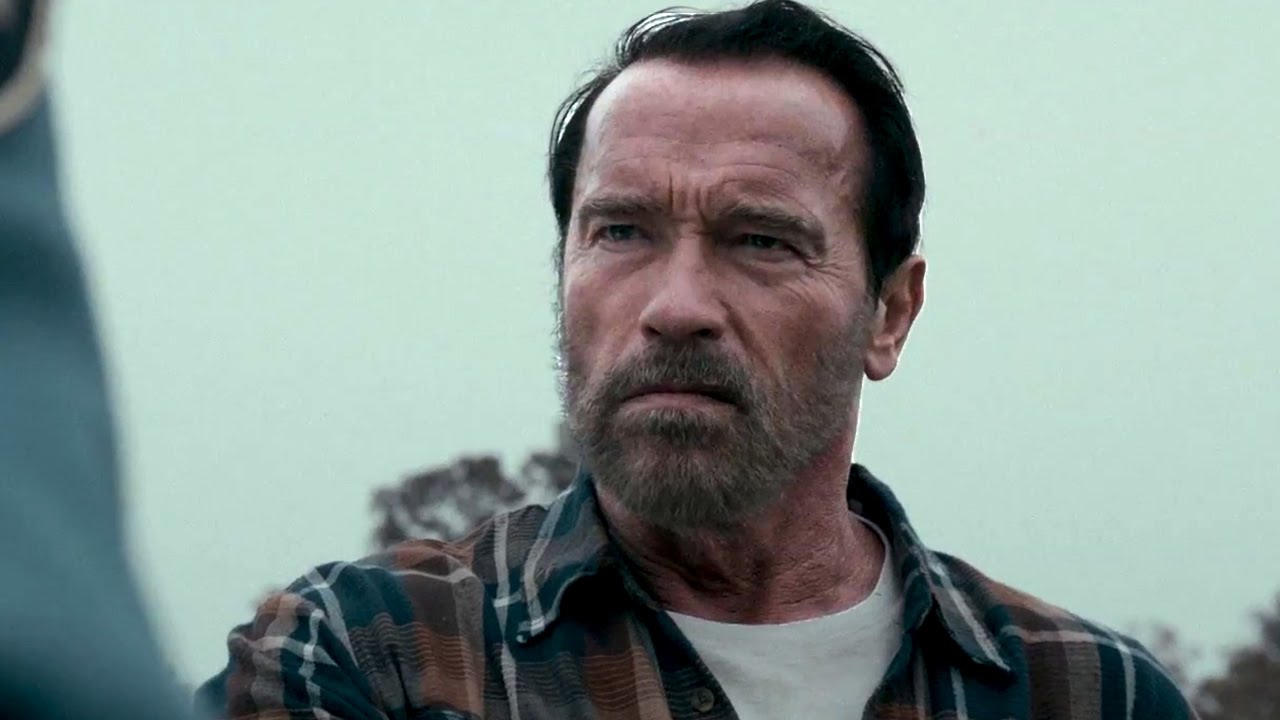 So MAGGIE (2015) is, at heart, a zombie film – but with a difference. Arnie plays Wade Vogel – loving father to a mid-west teenage daughter who becomes infected by an outbreak of a disease that slowly turns the infected into cannibalistic zombies. Arnold’s performance in this film has been described as “gentle”, “soft” and even Roger Ebert went on record to say, “Arnold Schwarzenegger is very good in this film“.

For the third and final choice of film for you to (re)watch in the Arnold Schwarzenegger #FilmJourney is PUMPING IRON (1977). This part-scripted, part documentary film follows amateur and professional bodybuilders from the legendary Gold’s Gym in California to the 1975 Mr Universe championships in Pretoria; with five time champion Arnie, defending his title. At one point in the documentary, Arnie is being interviewed and he explains what he thinks makes the difference between someone who can rise to be a champion and some who can’t; and it all, for him at least, boils down to will-power. 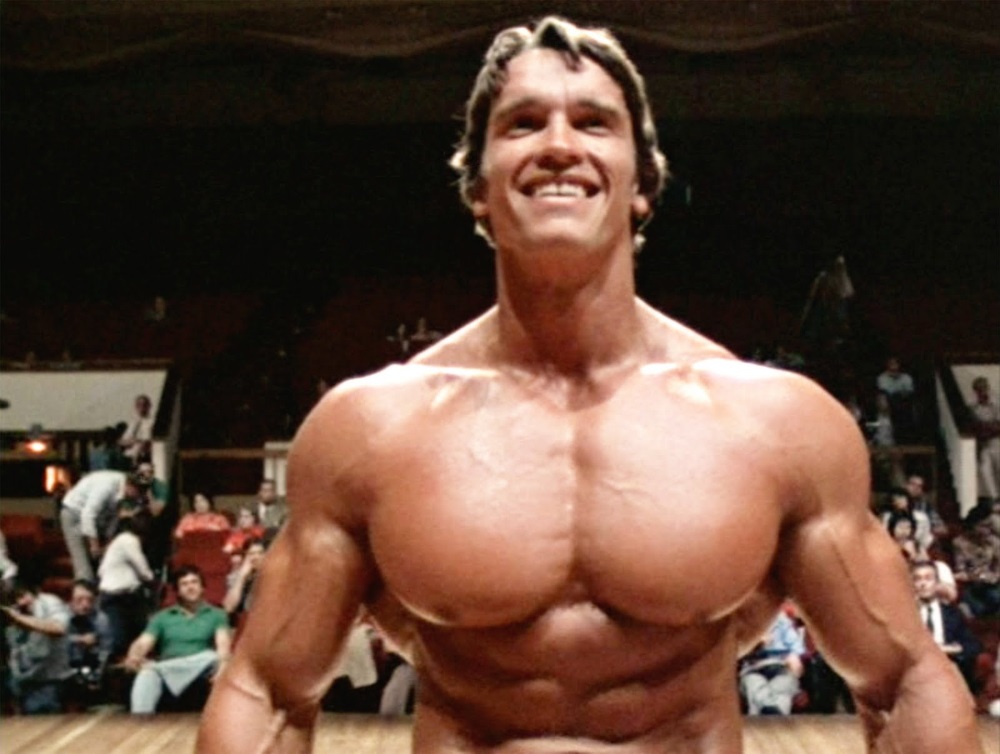 What is really interesting to see in this film is how Arnie is so sure of himself, so confident. He had five titles Mr. Universe titles, (and many, many more), under his belt already which must have helped bolster his confidence, but even so it’s still impressive. But then, if you read his autobiography ‘Total Recall‘, he tells of how this was, to some extent, an act – he was acting over the top, showing off, acting confident purely to put off his opponents. He would play other little mind games too – like saying to a competition who is working out, “have you put on a bit of weight? You look a little heavier than last week. I’m sure it’s just me – it must just be my eyes – but you do look a little heavier”; then he’d walk off knowing that that guy would be straight to the mirrors and then to the scales. The psychological side of bodybuilding competitions was, to him, just as important as the physical training.

And maybe, just maybe, that confident attitude combined with the judgment to know when to push, when to say something and when to keep quiet has been his biggest strength when forging his massively successful career.