Alan Rickman amassed a very impressive list of credits, in nearly 70 films, so it was a very difficult task to choose just three to feature in our Film Journey for him.

As well as his film credits, he was also a very accomplished stage actor; winning a Tony Award for his role in Les Liaisons Dangereuses; a performance which, according to his co-star Lindsay Duncan, made the audience leaving at the end of the night,  wanting to have sex “preferably with Alan Rickman”.

He directed two films: most recently A LITTLE CHAOS (2014) and prior to that THE WINTER GUEST (1997) in which he directed he long-time friend and collaborator Emma Thompson.

With such a varied career, it has been very difficult to narrow down which performances to feature. On the basis that this is a Film Journey, however, and not an obituary, I’ve decided to focus on three characters that show off just how talented Rickman was at giving a character some depth; particularly characters with, shall we say, ‘darker’ sides to them.

I’ve said before on Film Journeys that it’s difficult to get a villain ‘just right’; there is always a danger that you can go over the top with the performance when it’s not required. So, whilst Alan was romantic, leading-man status in some films and even showed particularly stunning comic timing in others, today we will focus on three villainous types. It’s really a little masterclass in ‘playing the baddie’. 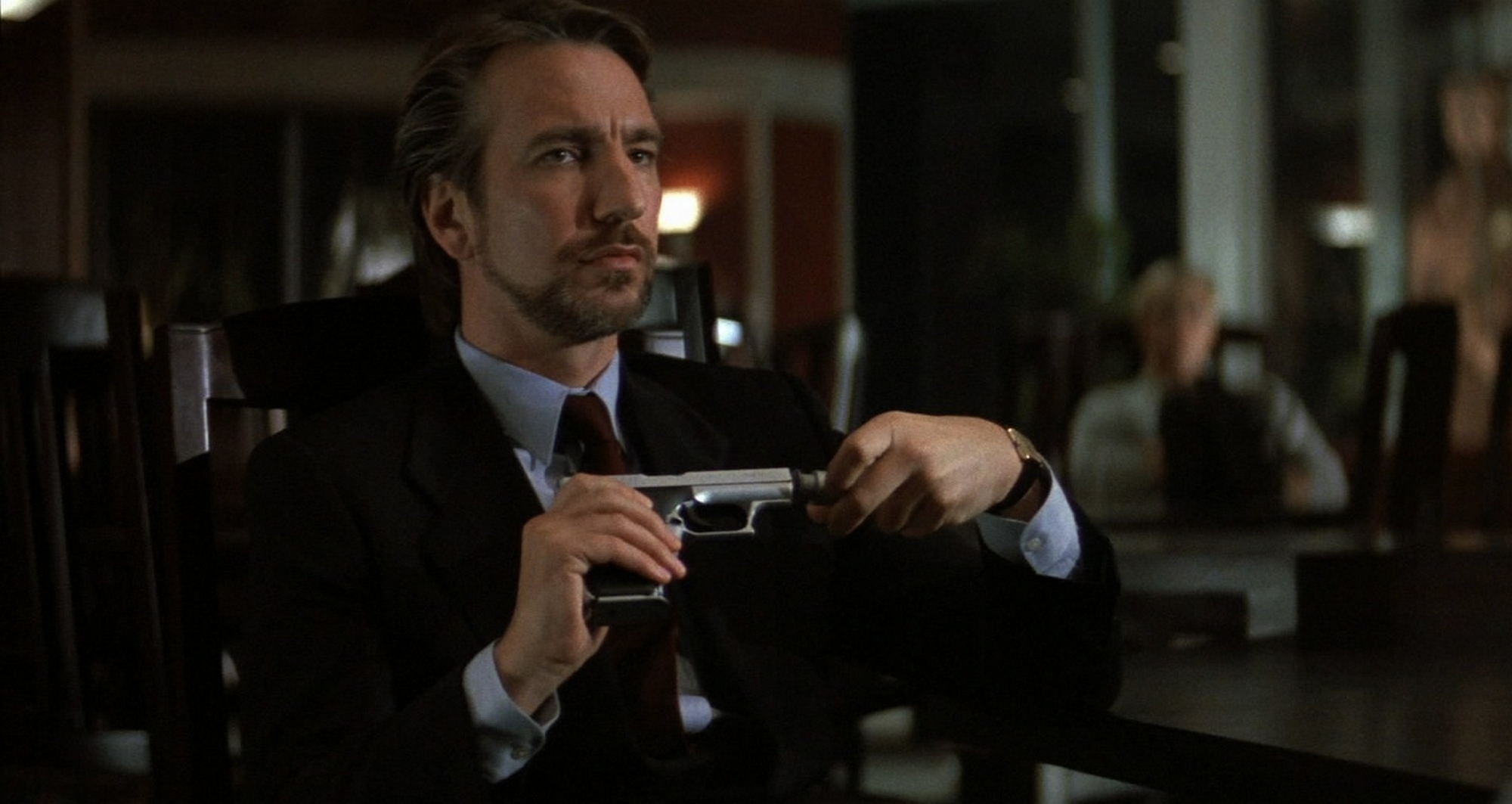 This film was the big movie break for Rickman. He skillfully played Hans Gruber, a character who, at first, appears to be a highly sophisticated terrorist but actually turns out to be more of a simple thief than anything else. Audiences and critics went wild for his performance, including a small snippet of a very convincing American accent, but mainly a spot-on German one too.

During an interview with Empire magazine, Rickman once said “I never expected to have any kind of film career”, and so it came as something of a shock when, aged 41, he found himself cast in this big Hollywood blockbuster after being in LA for just two days. He’d gone from a very deep, emotional stage performance on Broadway to holding a gun, in an action movie with explosions and Bruce Willis. 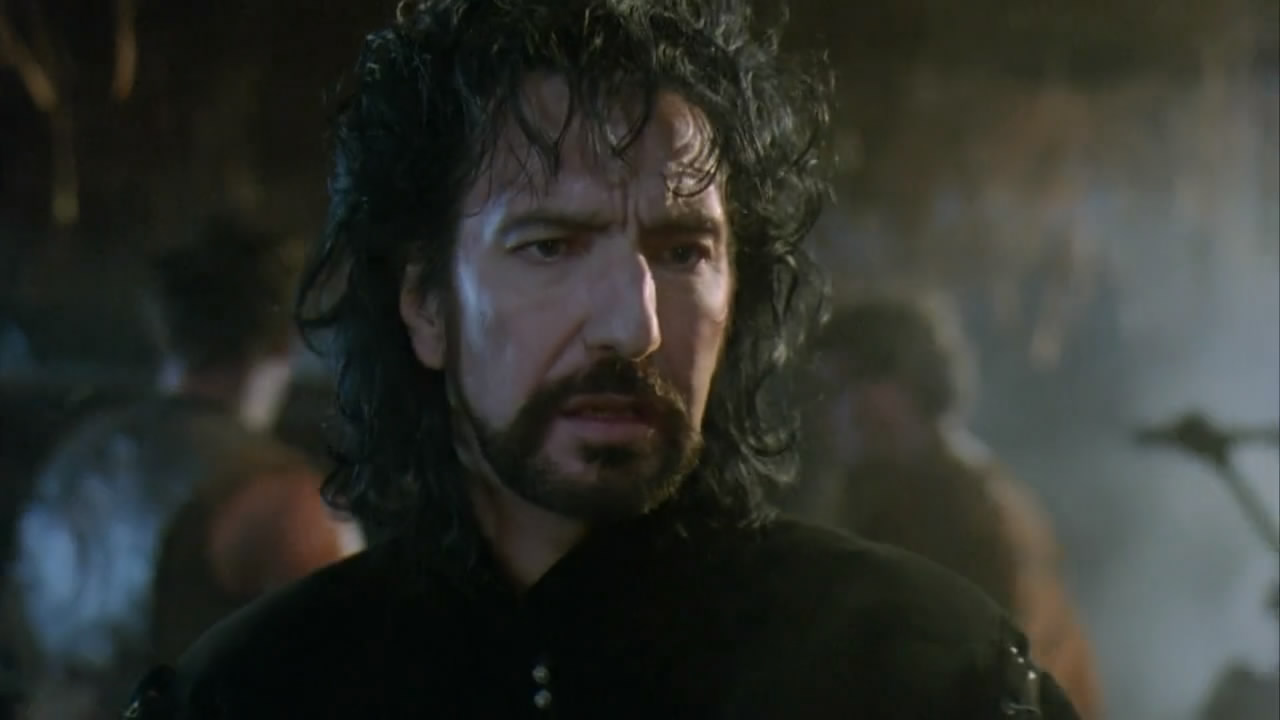 Alan Rickman as The Sheriff Of Nottingham in ROBIN HOOD PRINCE OF THIEVES (1991). Warner Bros.

It was 1991 and Kevin Costner was sure his big movie take on the old English fairy-tale of Robin Hood would be huge, and he was proved right; but rather than falling for the hero – it was the devilishly camp Sheriff of Nottingham, as played with great relish, by Rickman, that audiences were holding close to their hearts.

Now some say that his portrayal was over the top, but I think that’s exactly the point. If Hans Gruber from DIE HARD was a believable villain, then the Sheriff of Nottingham must be the panto villain; the baddie we all ‘boo’ at. There is a subtle difference between going ‘over-the-top’ and ‘playing-it-camp’ when it comes to bad guys; and this film is a study in those differences.

So, we’ve had Hans Gruber, (the believable villain), from DIE HARD and the Sheriff Of Nottingham, (the pantomime villain), from ROBIN HOOD PRINCE OF THIEVES and finally we have the anti-hero Professor Severus Snape, from the world of Harry Potter and the film I’ve chosen to reflect on is HARRY POTTER AND THE DEATHLY HALLOWS PART 2.

I’ve chosen this film because, (and I think it’s OK to talk about this *spoiler* now), but it’s here that we find out that Snape, the character we thought was in league with the devil himself for the last ten / twelve years was, in fact, an ally all along. We find out that everything he does is to try and stop Voldemort, (the big baddy of the series), and that it was all done for love.

And there you have it; just three performances from his nearly 70 film credits. He is, of course, much more than the perfect villain. If you want to see a subtler performance from him, I’d say check out him in TRULY MADLY DEEPLY (1990) and for comedy, try either GALAXY QUEST or DOGMA, both from 1999.

Other honourable mentions include …

But really, you could pick any one of his films and you know that, from Rickman at least, you’ll always get a stunning performance.